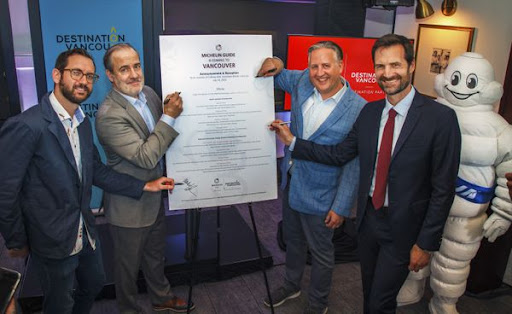 Michelin and Destination Vancouver representatives sign the menu at the announcement of the Michelin Guide Vancouver at the Pacific Institute of Culinary Arts in Vancouver on July 14.
MICHAEL DESJARDINS/THE CANADIAN PRESS

The Michelin Guide is coming to Vancouver. And as The Globe and Mail’s long-time restaurant critic for this city, I’m (mostly) excited.

At the very least, I hope this means I will no longer feel like the proverbial old man yelling at clouds about the lack of standards in the endless stream of listicles and thinly disguised advertorials that have invaded the city and, unfortunately, inform many people’s dining decisions.

As announced this week, Vancouver will join Toronto as the second Canadian city in the Michelin Guide’s growing international roster, which – love it or hate it – has remained the authority on fine dining since it was launched in France, by the eponymously named tire company, in 1899.

There are now 60 Michelin Guides covering 38 countries. Vancouver will be the 7th location in North America. Anonymous inspectors from around the world are already on the ground, visiting restaurants. Rated restaurants are visited by a minimum of five judges, who must reach consensus on their decisions, Gwendal Poullennec, the Michelin Guide’s international director, explained in an interview after Thursday’s event at the Pacific Institute of Culinary Arts. The results will be announced this fall.

And that’s about all we know about the secretive judging process, which could certainly benefit from more transparency.

When rumours began circulating last spring about Michelin’s impending Vancouver announcement, the overwhelming reaction from most people I talked to (especially Torontonians) was incredulity.

Does Vancouver really have any restaurants worthy of the prestigious three-star rating? Probably not, at the moment. But it does have plenty of restaurants worthy of one star, a handful that could capture two, and many more contenders for the Bib Gourmand awards (casual establishments that offer great value for money) and Green Stars (an environmental-sustainability award).

Mind you, these international guides are money-making ventures. And just because the Michelin inspectors are here doesn’t mean they’ll automatically grant stars. Let’s not forget that shortly after Toronto was announced, the first Michelin Guide for Estonia was revealed. The Baltic country, which paid God knows how much for the privilege (no one will discuss dollar figures), raked in two measly one-star awards.

If there is a similar result in Vancouver, it will be embarrassing. But for better or worse, it will inspire restaurants to up their game. The contract with Destination Vancouver was signed for five years, so there is time to improve.

One of the most frequent – and unfounded – criticisms I’ve heard about the international Michelin Guides is that they’re sponsored by tourism boards. Well, how else are the inspectors supposed to pay for their dinners and, presumably, get paid for their time? As a restaurant critic, The Globe pays for my expenses and compensates me for my writing. In 17 years, my editors have never once tried to influence my opinions. This is how fair criticism works.

Royce Chwin, the new CEO for Destination Vancouver, says he has a hands-off relationship with the Michelin Guide and we have no reason to doubt him.

In return, Destination Vancouver will receive an unprecedented marketing boost that will not just benefit restaurants, but also the hotels already listed on the Michelin website, and the entire city. This is its job – to invest in the tourism industry and increase business.

And as I’ve been telling people for years, international awards are not won just on the basis of merit. Government agencies must get behind them and bring those judges here. It was no coincidence that Eleven Madison Park was ranked No. 1 on the World’s 50 Best Restaurants list in 2017, one year after the awards ceremony was held in New York – with sponsorship from that local tourism board. Yes, it’s a game, but you have to be in it to win it.

So long as the Vancouver Michelin Guide is complemented by some sort of marketing endeavour that will put the spotlight on more casual restaurants that might be overlooked by Michelin – something similar to Tourism Richmond’s Dumpling Trail guide or The Spice Trail in Surrey – I think it’s a legitimate and worthwhile marketing expense.

And what about the timing? Is it fair to throw restaurants in the deep end so soon after the pandemic restrictions brought the entire industry to its knees? Restaurants in Vancouver are so acutely short-staffed that many are operating with reduced opening hours and menus. I can’t help but think about restaurants like Boulevard Oyster Bar + Kitchen, which actually could be a contender for two or three stars if the inspectors had the opportunity to try its full-length tasting menu or Table One series. Unfortunately, those menus are now only available by special request, which anonymous inspectors aren’t likely to do.

On the flip side, the excitement generated by a Vancouver Michelin Guide could certainly help build confidence in the industry, bring lost workers back into the fold and help restaurants recruit new talent from here and abroad.

But the overarching question (and great unknown) of how these restaurants are judged is a valid one. The Michelin Guide says all restaurants have historically been judged on five universal criteria: quality products; the harmony of flavours; the mastery of cooking techniques; the personality of the chef in the cuisine; and consistency between each visit.

Mr. Poullennec told me straight up that service and décor is not a factor.

This, quite honestly, feels disingenuous when you look at rankings around the world. Sure, the guide has expanded its reach to include more casual restaurants, including cafés, street vendors and food trucks. But these aren’t the establishments receiving three stars.

People have certain expectations of what qualifies as a Michelin-star restaurant. And if it doesn’t always jive with what the guides are saying, this is mainly because the organization is so wrapped in mystery and expanding at such a rapid rate that it has done a poor job of explaining what it’s trying to sell.

I’ve been a judge for many awards, big and small, and they’re all flawed in some way. But there aren’t many that can elicit the same level of buzz and excitement as the Michelin Guide.

So, we will wait and we will speculate and we will likely debate the final rankings to no end. But we won’t stop talking about it. And this, in the end, is really what they’re meant to do.