Something tremendously exciting is happening in Vancouver’s Bar Susu 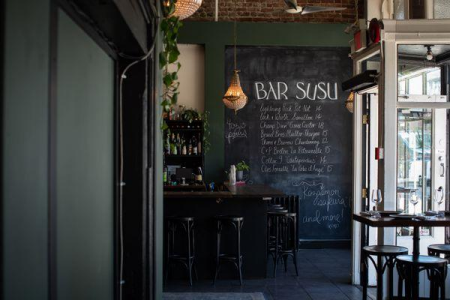 It’s a muggy summer night at Bar Susu, a natural wine pop-up that bubbled and grew in all sorts of wonderful ways and is now permanently ensconced (but likely still changing) in the former Whip Restaurant and Gallery.

What a beautiful brick heritage building, you think, so rare for Vancouver and romantically distressed with its scuffed wooden floors and cozy mezzanine.

As the fading sun dapples through the picture windows, glinting off crystals in tarnished chandeliers, it almost feels as though you’ve been transported to Old Montreal … or Melbourne or Madrid. 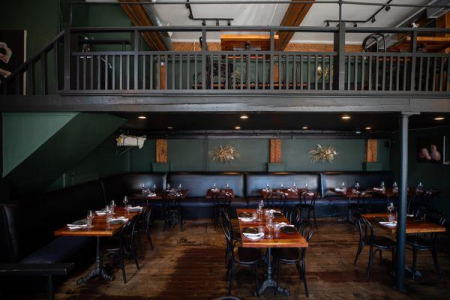 But then you glance at the table. There’s a minimalist pavlova, all crispy white spikes and folds, with a dab of rhubarb confiture hidden inside the soft centre. It’s floating in a pale-yellow pool of chicory root crème anglaise that pairs perfectly with an earthy yet delightfully bright house-blended amaro cocktail.

And the remains of a luscious lemon balm genoise with reduced milk ice cream, macerated strawberries and crunchy powdered streusel. You thought the sommelier was mad when she pulled out a rare, bottle-aged sake to go with it. But somehow, those gamey mushroom notes did the trick.

No, this is not Montreal or anywhere else. This is Vancouver, and you’re thankful it is, because something tremendously exciting is happening here at this unassuming wine bar that fully embraces the wild, dynamic, unconventional ethos of the fermented grape juice at its fertile core.

Bar Susu, as you might have heard, is the little sibling to fine-dining Published on Main, which recently took top spot in the list of Canada’s 100 Best Restaurants.

It’s owned by brothers Cody and Clay Allmin, who also operate Twin Sails Brewing, Thorn & Burrow Wines and the coming Novella (a fine-food grocery and high-end café). They purchased The Whip in 2019 and briefly turned it into a pandemic-era Tiki Bar pop-up called Juju’s.

Bar Susu, which launched in March after a two-week refresh (more of a cleanup than renovation), was also meant to be casual and temporary. But then fate intervened.

Ashley Kurtz, the former chef de cuisine at St. Lawrence, had been hired to run the culinary program at Novello. Gus Stieffenhofer-Brandson, who is the executive chef at Published, was going to step back from the kitchen line to oversee all three.

After Published won the country’s top award, the restaurant’s website crashed for three days. It’s been booked solid since, making it impossible for Mr. Stieffenhofer-Brandson to step away. In the meantime, Novello is still waiting on permits before opening.

So, Mr. Kurtz was given free rein at Bar Susu. After initially opening with a collaborative snack menu, he decided to roll out the opening dishes for Novella. And they’re brilliant.

You’ve might have heard about Mr. Kurtz’s reverse-engineered McChicken sauce, which he serves with golden hash browns. It was a fan-favourite from the outset and is a very good sauce, amped up with citric acid for fresh tang and a dash of MSG to keep the palate wanting more. 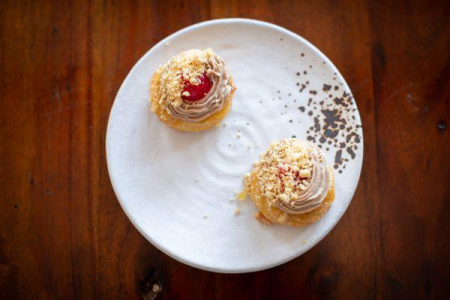 But I’m betting that his silky duck parfait piped over a honey cruller – soft, airy and fried to order with rhubarb jam and sprinkling of peanut brittle – is the dish everyone will still be talking about in 10 years.

Mr. Kurtz is a classic French chef at heart. But he also has experience with modernist cooking, having spent one year as chef de partie at Belgium’s In De Wulf and two years at Viajante Restaurant in London, after rejecting the well-meaning advice of everyone at culinary school, who told him to make his way up through the hotel system.

In his creative yet disciplined hands, those two disparate influences come together with a harmony rarely seen. 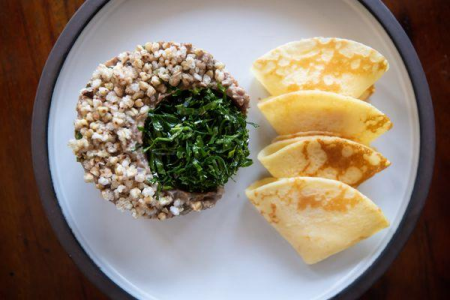 Boring old steelhead trout is given a spicy new lease on life with a quenelle of wasabi ice cream, amped with milk powder. It’s served with pickles in a tangy apple-cucumber sauce dotted with dill oil that punches it all up with another wowing layer.

Succulent smoked lamb bellies (brined overnight) are surreptitiously fastened with wheat glue so they look like fatty filets of steaked bacon. Every other component on the plate – minted grains, creamy house-made labneh and bitter radicchio – is pitch-perfect on its own, but should

be eaten with a bite of each on every fork to experience a sum that is greater than these many splendid parts.

There are so many wonderful dishes on this menu: summer cassoulet brightened with ramp oil and a wild medley of herbs; torched mackerel with a deconstructed Caesar salad and fat-cutting counterpoint of sour cherry; mussels escabeche tartine with sauerkraut and a gorgeous nantaise sauce. 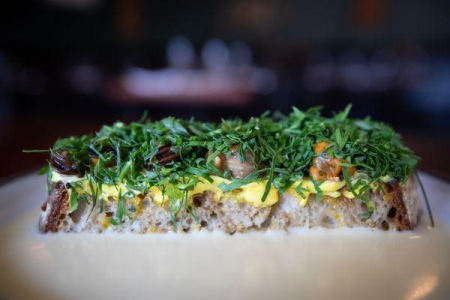 But given the free-wheeling nature of Bar Susu’s menu development, they don’t always mix and match seamlessly. It would be wise to order The Don’s Choice – a shared, prix fixe with five or six dishes – and let the chef guide you.

You are also in great hands with the servers, many recruited from Published, who can all navigate the ever-changing selection of daily wines and sakes with ease.

Sommelier Brittany Hoorne isn’t just doing a great job of curating her list of small-producer, low-intervention rarities and oddities. She has also trained her staff with aplomb, providing them with self-service access to the wine bar, so that they can better assist their customers with tasting samples and do a lot of education at the table.

The beverage program doesn’t stop there. In a very unusual departure from most wine bars, Bar Susu also has fantastic cocktails, most made with some sort of wine element – vermouth, sherry and house-blended amaros – that suit the whole theme to a T.

The blended amaros, which sprang from necessity because there wasn’t a single bottle of Fernet-Branca to be found in the entire province when Bar Susu opened – have grown into a cutting-edge innovation.

By the time the sun sets, you’ve had quite a few these great drinks. But this isn’t hyperbole: tonight, you’ve tasted history in the making.

The Allmin brothers, already a major force in Vancouver’s hospitality industry, are just getting started.

Ashley Kurtz is destined to become one of the city’s finest chefs.

This bar program will inspire trends.

And it’s all happening here, right now at Bar Susu, which will likely be quite different a few months down the road when a new chef takes over. If you only visit a single restaurant this summer, make it this one. 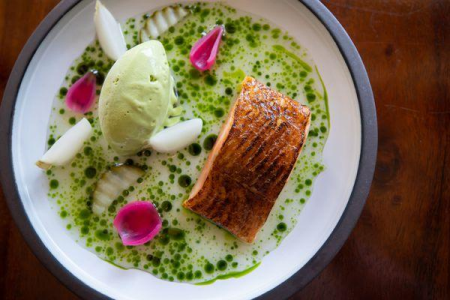