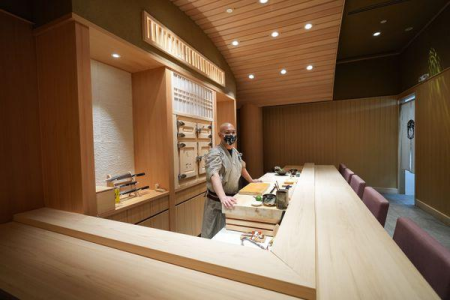 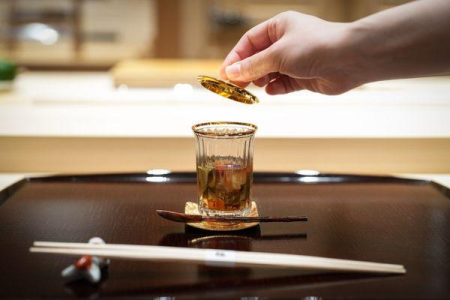 If you’re the type of diner who enjoys the pomp and Vegas-style circus of having weakly scented summer truffles presented in a Louis Vuitton accessories box, you probably won’t think twice about paying $499 for a 20-course omakase dinner at Sushi Kiwami.

But if you’re something of a sushi purist, you might find it outrageous that the most expensive restaurant in Metro Vancouver seems more concerned with superficial

trappings than the quality of the food – which is merely on par with several local sushi bars.

Sushi Kiwami is all about the experience. And it begins, rather unceremoniously, with a bumbling trek through a dusty parkade at the Richmond International Trade Centre that takes you down an unfinished stairwell carpeted with crumbly drywall debris until you’re spit outside onto the sidewalk.

First impressions matter and Sushi Kiwami deserves a better introduction, because once over the threshold, you are immediately transported into a hushed shrine of exclusive luxury that is infinitely more formal than any other Japanese restaurant in the city.

Having arrived a few minutes early, you are asked to wait in a swanky bar appointed in black and white marble, where you are offered a drink from the vast selection of premium Japanese whisky.

There are two back-to-back seatings, with a maximum of nine guests at each, but tonight it appears that you have the place to yourself.

At 8 p.m., on the dot, you are escorted down a narrow, low-lit hallway and past two closed rooms, reserved for private members. At the end of the corridor, a server dressed in a traditional kimono parts the curtains and welcomes you into the main dining area. 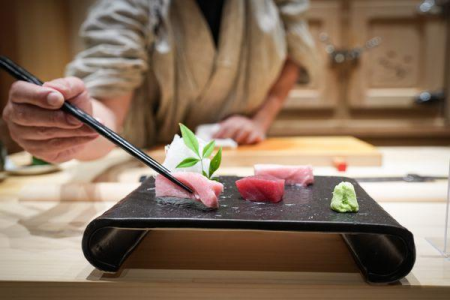 The minimalist space, softly glowing in pale cherry wood and bamboo, is more temple than restaurant. An exceptionally wide, low-slung chef’s counter set with dusty-rose armchairs is the altar. There is a floating archway over top. And against the back wall, a tall wooden chest with silver latches that looks like an armoire but is actually an old-fashioned ice box where the fish is stored (to keep it temperate, presumably, and protect against unsavoury aromas that might leak from an electric fridge).

For those who have been fortunate enough to dine at the acclaimed Sushi Masa Ishibashi in Tokyo’s Ginza district, this room might look familiar. As general manager Stone Shi will later explain by phone, owner Crystal Zhou commissioned the same designer to create exact replicas for this restaurant, which opened last summer, and her first Sushi Kiwami, in Nanjing, China.

You might as well soak up the rarefied atmosphere – the beautiful ceramics, the handwritten place cards, the tiny finger towels, the two servers quietly hovering over

your shoulder and dabbing every stray kernel of rice while, incongruously yet repeatedly, pointing out the restaurant’s Instagram QR code prominently displayed on a plastic placard. This is what you’re paying through the nose for.

There are actually two menus, at $399 and $499 a person. They are identical save for one excellent and extremely expensive hairy crab course, embellished by Hokkaido uni, Beluga caviar and delicate shiso flowers. 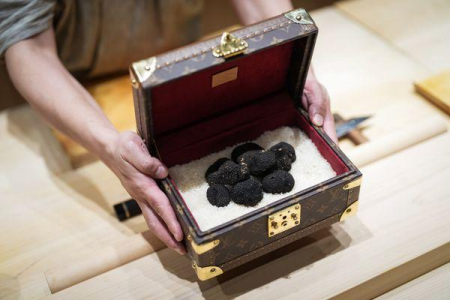 The $299 menu, offered when the restaurant launched, is no longer available. Truffles are displayed in a Louis Vuitton case.
DARRYL DYCK/THE GLOBE AND MAIL

Although shocking for Vancouver, these prices are comparable to the upper echelon of sushi restaurants around the world. The omakase menu at Toronto’s Sushi Masaki Saito, for instance, starts at $680. But at this level, you are usually in the hands of a sushi master – or at least an apprentice who is being supervised by a master.

Chef Eto Kinja, who will be serving you, your friend and another couple (who arrive a few minutes later, clad head-to-toe in designer formal wear) only started training seven years ago, at the Michelin-starred Kanesaka chain, after winding down his career as a champion motorcycle racer.

There is another sushi chef, Yuta Arase, who has more experience (primarily in a kappo restaurant), but isn’t working this evening. And a third chef, Kunihiro Soeda, who never appears and seems to be a mystery, even to the manager.

Shame, because Mr. Soeda’s hot dishes – lightly simmered and smoked seawater eel tucked into a crackly handroll; buttery A4 Hitachi-Gyu tenderloin seared to perfection; and magnificent sea bream, its skin finely scored and broiled into a crunchy crown of thorns – will be the highlights of the night. Yes, that’s saying something.

The dishes are all exquisitely presented, from the initial bento box filled with thimbles of tomato jelly and sweet corn soup to the final cream cake painstakingly layered inside a fragrant yubari melon. 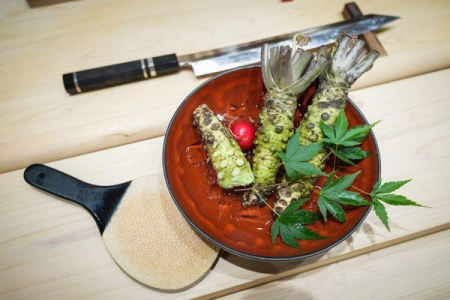 The fish is all top quality, imported from Japan (as it is at most premium sushi restaurants). But so are the ambrosial strawberries in the cake and the fresh ginger buds served as zesty counterpoint to the rich sea bream. Sushi Kiwami’s deferential sourcing goes above and beyond.

The chef’s knifework is highly disciplined, especially the way he slices cuttlefish into paper-thin sheets and scores it with dozens of evenly spaced parallel cuts. Still, when chewing the gummy little cephalopod, you can’t help thinking that you’ve had it transformed into a more magical mouthfeel elsewhere.

The garnishes are occasionally transcendent. The golden eye snapper, lightly torched and dusted in yuzu zest, is a stand out. But the chef is heavy-handed with the wasabi. So much so, the quiet couple to your left finally speak up and ask the chef to stop using it.

The rice is on the cool side of body temperature, which is traditional. But it’s seasoned with red rice vinegar, which is trendy and almost distractingly assertive.

From time to time, the chef pulls out rare extravagances – Japanese abalone simmered in sake for seven hours, for example, or Toyama white shrimp aged on kombu for one hour – that begin justifying the cost.

But he’s more likely to bang you over the head with the repetitious use of expensive ingredients that conspicuously signify bling. On a 20-course menu, Hokkaido uni shows up four times; bluefin tuna, six. There is so much tuna, you are almost expecting the next course to be served by Jay Z with a side bottle of Cristal. 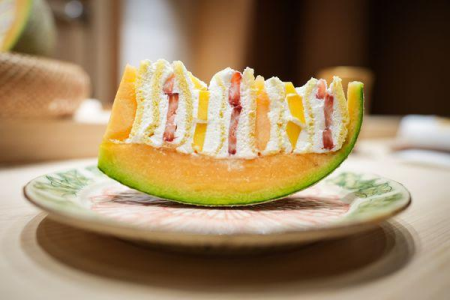 What’s really missing, more than anything, is a true sense of omakase, which, in Japanese means, “I leave it up to you.” This implicit trust is a two-way street: the chef should be sizing up you as much as you’re sizing up him, and adjusting the menu accordingly.

It might be different for private members, but in your experience, there is no interaction with the chef at all. The menu only changes seasonally, the manager said.

And, judging from the servers’ surprise when you flip the nigiri upside down and place the fish on your tongue, their guests don’t have a lot of experience with high-end sushi. Which perhaps explains the mashed-up waste of o-toro tuna, two types of uni and flavourless truffles (via the Louis Vuitton case) for the final course.

From the ostentatious use of luxury ingredients to the lack of personal expression by the chef, Sushi Kiwami feels more like a paint-by-numbers menu than a true omakase experience. And that is what makes the $499 price tag – $650 with tip, tax and one small glass of plum wine – hard to swallow.

0Like
Land & Sea fails the acid test, leaving customers to chew the underseasoned fat previous Something tremendously exciting is happening in Vancouver’s Bar Susu next