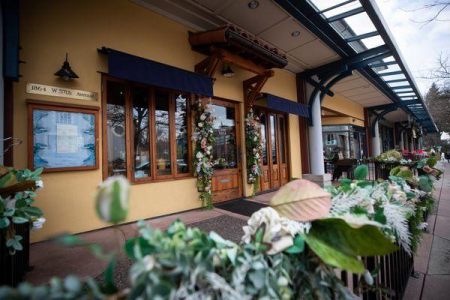 Near the end of my second visit to Kerrisdale’s Land & Sea, I was tempted to go grab a lemon wedge from the bar. I wanted to squeeze its tangy juices over a plate of unagi risotto to brighten and lift all the sweet starchiness, fattened up with mentsuyu butter and the rich yolk of a 63-degree egg.

On its own, this full-bodied dish might have been delectable. But it was the fifth in a succession of big, creamy, cloying flavours (the food on the first visit was similarly sweet across the board) and my palate was in desperate need of tart relief.

Thinking the lemon move might be rude, I asked if the kitchen had any black vinegar, which is a common ingredient in Taiwanese cooking (chef-owner Kevin Lin is Taiwanese-Japanese) and is often served as a table condiment in Chinese restaurants. 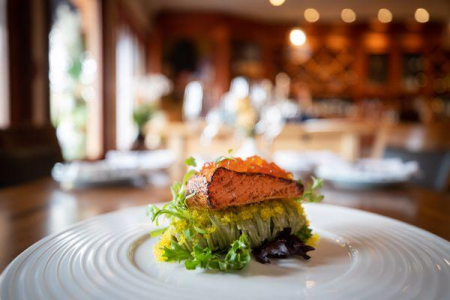 The kitchen had none of the above. At this point, I should have asked for ponzu or yuzu, because Land & Sea is a Japanese fusion restaurant. But after being offered reduced balsamic glaze, I pretty much gave up. Actually, I asked for salt, which was a dumb idea that only amplified the caramelized sugar on the eel.

“Kevin has an aversion to acid,” his partner and the restaurant maître d’, Stephanie Wan, explained.

Mr. Lin’s preference would be perfectly fine, if he were cooking at home for himself. But in a professional setting?

Acid is an essential building block of flavour. It’s the sharpness that cuts through fat, the sour that balances sweetness, the tang that add swirls of dimension, the pucker that

literally makes us salivate. I’m paraphrasing Samin Nosrat, whose bestselling cookbook and excellent television series, Salt, Fat, Acid, Heat explains the alchemy of seasoning in much more detail. But any culinary instructor will tell you the same thing.

Sure, acid can be overwhelming if not used judiciously. And many chefs these days are out of control with their funky fermented flavours. But I firmly believe that it’s impossible to make delicious food without embracing acid’s indispensable brilliance.

Maybe I’m in the minority because Land & Sea has been jam-packed since Mr. Lin and Ms. Wan opened their new restaurant in September. For months, it was almost impossible to secure a reservation without booking two weeks in advance.

The sustained popularity cannot be chalked up to Kerrisdale being a barren restaurant desert in a neighbourhood overflowing with wealth, though that probably is a factor.

The room’s dark-wood, open-kitchen Italian trattoria design, which is cozy but remains basically unchanged since its days as Coco Pazzo and Senova, is not the main draw either.

Ms. Wan is a talented food blogger who works full-time as a UX/UI designer (you can see her work every time you pull out the PayByPhone iOS app). But I do not for one second believe that a social-media influencer or digital marketer can make a restaurant any more than a newspaper critic can break one.

What Land & Sea does offer, unequivocally, is polished service, beautiful plating, the lavish use of luxury ingredients and an abundance of creativity.

The shiso wrap is an excellent example of its showy potential. The $15 bite – more of an amuse-bouche than an appetizer – is an extravagant bijou neatly stacked with seared Satsuma A5 Wagyu, Hokkaido uni and ikura. It’s beefy, smoky, briny, creamy, salty and poppy – laid out on a green shiso leaf, which has a bright, minty, citrusy flavour pulling it all together. The shiso is key and not just as a vessel to hold the bundle aloft when

transporting it from plate to mouth. Without that delicate layer of fresh astringency, the rest of the ingredients would collapse into a puddle of excess. 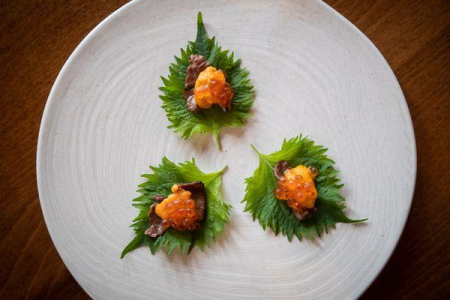 The shiso wrap is an extravagant bijou neatly stacked with seared Satsuma A5 wagyu, Hokkaido uni and ikura.
DARRYL DYCK/THE GLOBE AND MAIL

Mr. Lin, a self-taught chef who studied hospitality management (in Switzerland and Canada), was a fine-dining restaurant manager at the Mandarin Oriental in Singapore and Hong Kong, and most recently worked for the Glowbal Restaurant Group, can cook very well with acid. When he opened Uncle’s Snack Shop in Richmond last summer, his pomelo salad with spicy tamarind dressing was one of the best dishes I ate all year.

But I couldn’t taste a lick of that zesty brilliance in his Gindara sablefish floating in a sweet pool of tomato dashi. The tomato was acidic, but not enough to balance the miso glaze and tofu.

Or his Ora King salmon tartare (an incredibly rich fish on its own) larded with sweet mango and creamy avocado.

Or his chili crab ravioli in sweet tomato sauce (which also suffered from oil-soaked crab tempura, probably a result of an inadequately hot fryer). 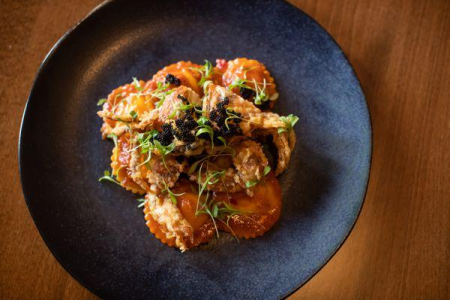 His Vongole XO was actually very well spiced, with enough heat to balance the creaminess, and the handmade chitarra pasta had a good toothy bite. I could point out that an XO sauce made without dried shrimp, dried scallops or Jinhua ham is not really an XO sauce. This one is made with fresh baby clams.

But Mr. Lin is not the only chef experimenting with the classic Cantonese condiment nowadays.

The more important issue is that almost every dish, though full of great promise, was sweet and lacking in acidity. None of it, save for the shiso wrap, tasted balanced.

I will give Mr. Lin credit for being consistent because there’s not even much acidity to be found in the wine list, which features a lot of oaky Chardonnays and plummy reds.

And oddly enough, his black sesame chocolate brownie is more savoury than most of the main dishes.

I agree with Mr. Lin who states on his website that “cooking is often overcomplicated” and cooks “shouldn’t be confined by rules.” Go ahead, express yourself. Push cultural boundaries. Throw off the shackles.

But there are certain elements of cooking that transcend traditions and are common among cultures. And when a chef has an aversion to acid, his customers are the ones left chewing the underseasoned fat.