The Beijing Duck at Quan Ju De is legendary, and its Vancouver location does not disappoint 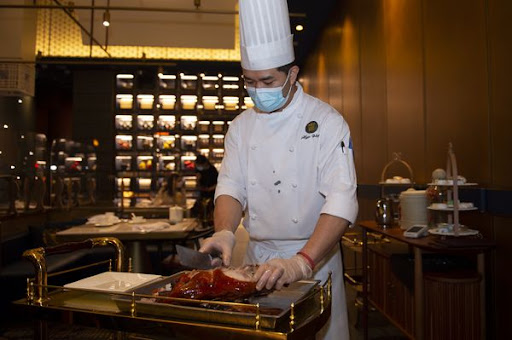 Vancouver’s flashiest new Chinese restaurant might offer many morsels on golden platters to gripe about, but its legendary, crackly skinned Peking duck is not one of them. The roast duck is exemplary.

Quan Ju De, which opened with inauspicious fanfare in February of 2020 shortly after a jeep crashed through its front windows at 12th and Cambie, hails from venerable lineage that goes back to the Qing Dynasty. 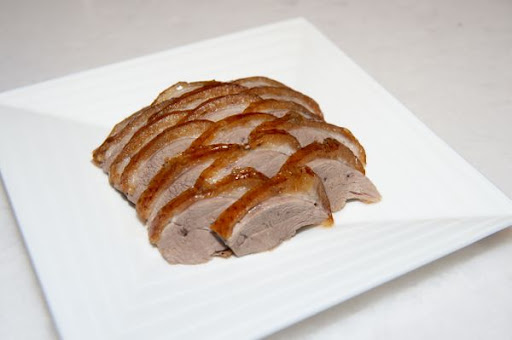 Now one of China’s most renowned roast duck chains – serving more than two million ducks a year across four continents – the original Beijing restaurant was founded in 1864. That’s when an entrepreneurial owner poached a chef from the imperial palace, adapted a preciously guarded recipe for hanging ducks over open flames and introduced a royal delicacy to the upper-class masses.

In modern history, Quan Ju De became even more famous for playing a pivotal role in Cold War “duck diplomacy.” In the 1970s and 1980s, it was the state-banquet venue of choice for premier Zhou Enlai, who hosted numerous foreign dignities at his favourite seven-storey Beijing location, including Henry Kissinger, Richard Nixon and Fidel Castro.

But the $12-million Vancouver branch was intended to be one of the showiest of them all.

Every nook and cranny, from the banquet-seat cushions to the palatial bathrooms, is gilded in gold. The walls are covered in Chinese wood block art. From the lofty ceilings, a skyline of Beijing’s most prominent architectural landmarks hangs upside down.

The restaurant is properly called iDen & Quan Ju De Beijing Duck House because it was supposed to feature Canada’s first 5-D dining experience with immersive wall screens and projected animations – try to imagine FlyOver Canada (or Shanghai) in a private dining room with a little Ratatouille Disney creature dancing across your table.

There are 55 Quan Ju De affiliates in China alone, but the $12-million Vancouver branch was intended to be one of the showiest of them all. 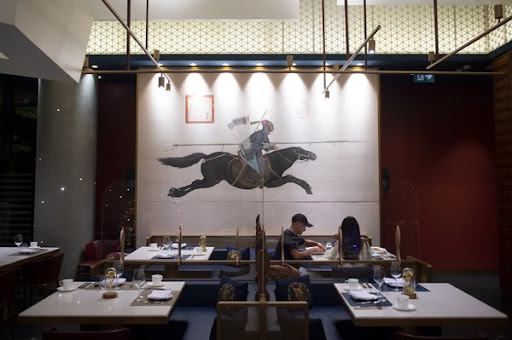 The COVID-19 pandemic has postponed the iDen experience. But the restaurant is still charging VIP membership fees, ranging from $3,000 to $8,000, for use of the private rooms, one of which boasts an enormous lazy susan on a banquet table that fits upward of 20 people.

More recently, the restaurant introduced Bella, a robotic server that wheels around the dining room to help deliver plates and entertain children.

Mind you, these robots are becoming a dime a dozen in local Chinese restaurants, posing neither a threat to the human labour force nor much notable assistance.

On my most recent of three visits, the only time I went without Chinese diners, the service was so excruciatingly slow, I sat in the restaurant for a full hour and 15 minutes before I received a drink.

A little while later, when I asked why we had only been served pea tips – premium pea tips, that said, stir-fried in white spirit (baijiu) – our server, who kept disappearing for long stretches, was apologetic.

“I thought you wanted to be served in a fine-dining style, not with the dishes squeezed all together, Chinese-style,” he said.

Bring on the other dishes, Bella.

For all its modern pretentions, which include an English-language menu, wide selection of alcoholic beverages and stated intention to be a “fusion of traditional Chinese food with a North American flare [sic],” Quan Ju De is not an easy restaurant for Westerners to navigate. 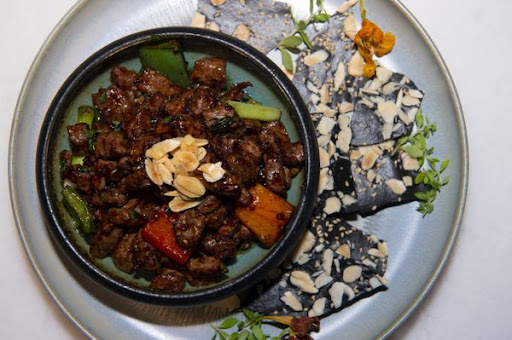 It could be that we just weren’t ordering enough of the luxury menu items – the A5 Wagyu, the superior Japanese 15-head-sized dried Yoshihama abalone for $360 a person or the $100 caviar add-ons.

We did order a few of the highly performative fusion items, including five-spiced venison, theatrically served in a giant goldfish bowl puffing with smoke (tender, but could have been any meat because all we could taste was the warm, star-anise-inflected spice).

And on this occasion and others, I ate several modestly priced, humble dishes executed with great ingredients and deft skill.

But at the end of the night, after we split the bill, leaving our server with a 25-per-cent tip, I honestly did not expect him to come chasing after me, asking what went wrong and why I didn’t leave him anything on my credit card. (We left the tip in cash, which he hadn’t bothered to count.)

For all my complaints, I do not have one bad thing to say about the Beijing duck (also known, but not properly) as Peking duck.

It is expensive, at $98 a duck, but not out of line with any other Beijing ducks in Vancouver, which are quite different from the less expensive Cantonese Peking-style ducks.

The meat is a little bland, but that is the way it is meant to be. The Cantonese ducks are marinated with five-spice seasoning, which give them extra punch. The Beijing ducks, which are only marinated with maltose on the skin and hung to dry overnight before roasting (which makes them more time-consuming to prepare), have nothing to hide behind.

The Quan Ju De ducks might be juicier in China (I can’t say, I’ve only tried them here) but that’s primarily because in Canada, they’re not allowed to be force fed and fattened up quickly. A good thing, I think most people would agree.

They are only served in two courses: with the crispy, golden-lacquered breast skin carved tableside into thin strips, which you then dip into raw sugar granules to pop the porcine fattiness; and in meaty slices edged with more of that crackly skin, to wrap in warm, whisper-thin crepes with slivers of scallion, cucumber and hoisin sauce.

I don’t know why the remainder of the duck is not served in lettuce wraps or stir-fried into rice, as is typical in Cantonese restaurants. But I suspect the difference has something to do with the frugal, farmhouse ideals of Cantonese cookery.

And tradition – this is the way they’ve been doing it in Beijing for 800 years.

Quan Ju De does, however, wrap up the fleshy carcass and sends you home with it. And for an extra few dollars, you can order the gizzards or duck bone soup.

So there is nothing really to complain about. At least not when it comes to the duck.