ALEXANDRA GILL
SPECIAL TO THE GLOBE AND MAIL
PUBLISHED MARCH 10, 2021 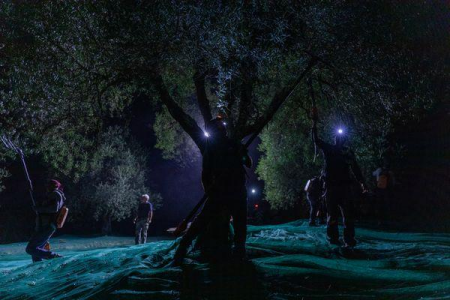 On an evening in the early fall, olive pickers on the Domenica Fiore estate take to the trees under the glow of floodlights.
GABRIELE STABILE/THE GLOBE AND MAIL

The Domenica Fiore olive oil estate lies on a gentle slope overlooking the ancient hilltop town of Orvieto, in Umbria’s green heart of Italy, halfway between Rome and Florence. On a balmy evening in late September, owner Frank Giustra and director Cesare Bianchini are hosting an al fresco dinner to celebrate a new tradition: the Novello di Notte night harvest.

Negronis clink, pasta twirls and cashmere shawls are pulled tighter as the sun dips beyond the unspoiled horizon and a dramatic skyline time-lapses from dreamy cerulean blue to star-twinkled indigo. This is la dolce vita at its finest – until the tranquil setting suddenly transforms into an otherworldly scene from a Ridley Scott movie.

A tractor roars to life, trundling a blazing tower of floodlights through the grove. Green netting is unrolled over sandy soil. And a crew of sweaty workers emerges from the shadows. Reaching high into the leafy treetops with vibrating rakes, they softly comb the fruit to the ground, after which the juices will be immediately pressed and nitro-sealed in stainless steel tanks without ever seeing daylight. 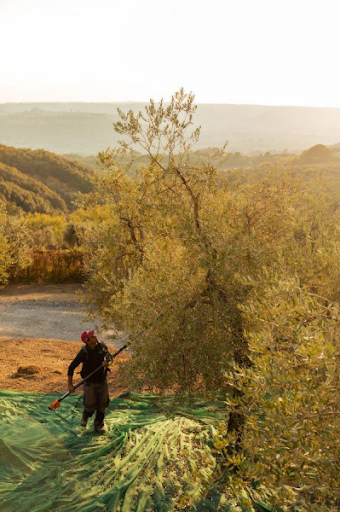 “This is where it all begins,” says Giustra, the Vancouver-based mining magnate, philanthropist and founder of Lions Gate Entertainment (whose producer credits actually do include Scott’s Blade Runner 2049), as he pours wine for the farm hands and leads everyone in a rousing rendition of Brindisino – “la la la la la la, hey!” – a popular drinking song.

Some of his Italian guests are puzzled. This is too early – more than a month too early – for olive harvesting, which doesn’t typically start in this region until after the Day of the Dead (Giorno dei Morti) festivities on Nov. 2. The fruit hasn’t yet ripened. The yield is still low. The weather is too warm. Does this crazy Canadian billionaire, on a mission to create the best olive oil in the world, know what he’s doing?

The proof, Giustra is betting, will be in the bottle (also stainless steel and nitro-sealed): a super premium, extra virgin, cold-pressed olive oil that is harvested as early as possible to preserve its precious antioxidants and pungent freshness. Although not readily obvious, this modern disruption of a sacred agricultural custom also captures the dynamic character of a town that appears trapped in time but has rarely stood still.

Perched on a towering pedestal of tuffaceous rock and cast in a peachy glow, Orvieto has the enchanted aura of a fairytale kingdom floating over a lush valley, which once upon a prehistoric time was submerged under seawater. Fallout from the violent volcanic eruptions that once plagued this region created fertile growing conditions for the structured white wines and organic olive oils that now represent the area.

The miracle of the soil, some say, is what makes Umbria special. But it was the people – from the early Etruscans who first settled this natural fortress in 9th century BC to the papal rulers and noble families of the Middle Ages to modern-day Slow City revivalists – who have immaculately maintained one of the most spectacular hill towns in all of Italy.

“It is such a beautiful town, even the Germans couldn’t destroy it,” says Bianchini, a proud ambassador and native son. The day before the harvest, he is leading the Domenica Fiore guests on a winding tour through Orvieto’s narrow cobblestone streets,

sprawling underground city and majestic gothic cathedral. The latter, along with so many other architectural treasures, was spared destruction during the Second World War when the commanding officers of the advancing Allied and Axis squadrons, awed by the Duomo’s dazzling mosaic façade, made a gentleman’s pact to take their battle elsewhere.

Huffing and puffing, we ascend from the Pozzo di San Patrizio, a double-helix spiral stone staircase and marvel of medieval engineering that ensured the water-bearing mules going up and down never crossed paths. The city, lacking a natural water source, would never go dry under siege. “Quod natura munimento inviderat industria ajecit” or “what nature stinted for provision, application has supplied,” reads the inscription over the entrance. 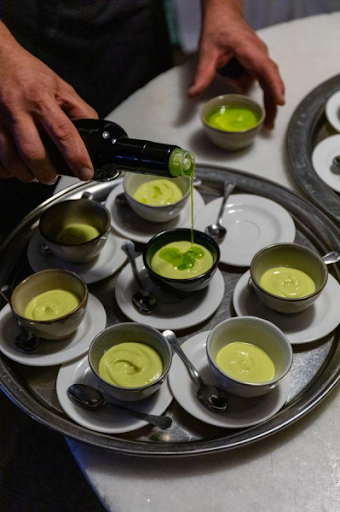 Around harvest time in the early autumn, they gather guests for dinner and to taste the vivid green oil as soon as it’s cold pressed.
GABRIELE STABILE/THE GLOBE AND MAIL

Later that night, we meet for dinner at a country villa on the other side of the valley. Giustra, who has been cooking up a big batch of eggplant Parmigiana, explains that the kitchen is his happy place. His passion for food was instilled by his mother, Domenica Fiore, after whom he named the company. It’s one of Giustra’s many culinary ventures that include Modern Farmer magazine and the Million Gardens Movement, co-founded with Kimbal Musk, Tesla founder Elon Musk’s brother.

Giustra and his family have been coming to Orvieto every year since the early aughts, when Kim Galavan, his former executive assistant, had her “under the Umbrian sun” experience, bought this villa, began restoring it and fell in love with Bianchini, who was working at his family’s antiquities shop.

“One night she came up from the cellar with a little jug of olive oil that she had made from the trees on this property,” Giustra says. “I knew nothing about olive oil – I was used to whatever you buy at Safeway – but I had never tasted anything like this. The

next day, she took me to meet a guy named Romano, who had the press and a small estate on the other side of the valley, where the soil is better. We tried his oil and I thought ‘holy cow!’”

Giustra decided to take some of Romano’s olive oil back to Vancouver and do a blind tasting with foodie friends and chefs alongside nine of the most expensive brands they could find. Their private stash was the favourite by far.

“I looked at Kim and said, ‘We are now in the olive oil business. Go back to Italy and buy some land.’ Then I said to Cesare, we’re going to create the best olive oil in the world.’” 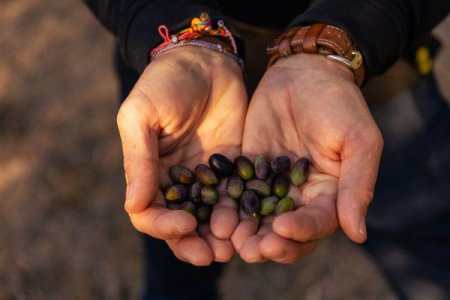 They achieved that goal with their second harvest at the prestigious New York World Olive Oil Competition in 2012. “The first time we won an award for best olive oil in the world, at first I was thinking it was a joke,” Bianchini says. The judges had a lot of questions. Bianchini, who had already begun harvesting early, though not yet at night, was becoming accustomed to skepticism. “The oil was so powerful, so full-bodied, lots of customers said there was something wrong. We had so many bottles sent back. It was a magical moment. And I thought that was it. When we won again the next year, I knew the changes we were making were right. And now we’ve won so many awards, I’ve lost track.”

Giustra says he has no expectations of ever making a profit, but he and Bianchini, who is now certified by the National Organization of Olive Oil Tasters, take their passion project seriously. They pick and press all their olives within four hours, reducing the risk of fermentation and the development of free fatty acids. The nitrogen-sealed

stainless-steel bottles and tanks eliminate oxidization and exposure to light, while lowering free radicals. An early harvest lowers quantity, but raises quality, enhances bitterness, pungency and other desired flavour characteristics while also extending shelf life by capturing more polyphenols. And when pushing the limits of that early harvest into September as they do now with Novello di Notte, they reduce heat by picking under the cool cover of darkness.

“It’s also a whole lot of fun,” Giustra says the evening of the night harvest. “We set up this beautiful long table under the stars, eat great food, drink, laugh, sing. It’s magic when the stars come out and we get to watch the process of seeing what was fruit in the morning turn into emerald liquid by the end of the day.” 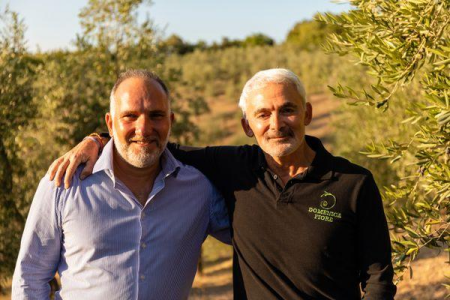 While it’s hard to judge the oil straight off the press before all the fruit from the various orchards are blended, the first drops carried back to the table in a glass jug and drizzled over lemon sorbet has powerful freshness on the tongue and an intense spiciness that hits the throat with a bang.

“It’s more powerful than normal,” Bianchini says the next morning, grinning ear to ear when we sit down at a restaurant in town for a more formal tasting that emphasizes notes of mint, eucalyptus and arugula. “It’s an explosion from the mouth to the mind.”

***Style Advisor travelled to Italy as a guest of Domenica Fiore. The company did not review or approve this article prior to publication.

2Likes
Globally inspired, locally rooted Published on Main is quite unlike anything else in Vancouver previous The Beijing Duck at Quan Ju De is legendary, and its Vancouver location does not disappoint next