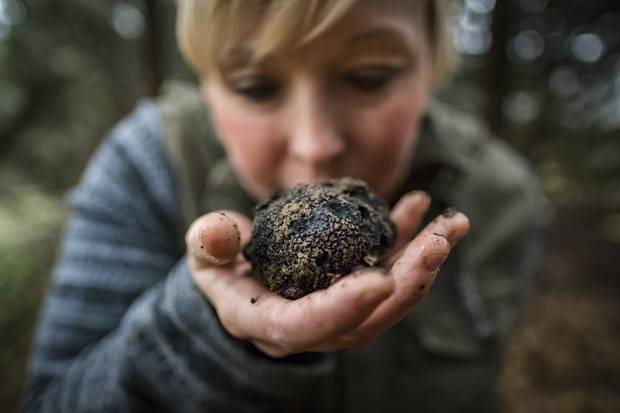 B.C. has recently placed itself on an exclusive list of elite regions around the globe capable of growing the highly prized fungus, writes Alexandra Gill

Brooke Fochuck takes in the smells of a fresh B.C. truffle near Vancouver.

One is from southeast France, where the wild delicacy has been hunted in forests for thousands of years, but is far more commonly cultivated in orchards nowadays.

The other is from Below the Nut Farm on Vancouver Island, where, after 10 years of meticulous tending, the first commercial crop in all of Canada was quietly unearthed by two trained Vietnamese pot-bellied pigs in mid-December.

The local bumper crop, which has already produced more than two kilograms, puts British Columbia on a small map of elite regions around the globe (including Oregon, Tennessee and Tasmania) capable of growing the highly prized Tuber melanosporum.

Although the two truffles belong to the same DNA-sequenced species, they look slightly different.

The French-grown specimen is more thickly textured than the one from British Columbia, with darker black spores on the skin and thicker white veining throughout.

“Obviously, the French spores are older and more developed,” says Quang Dang, executive chef at Vancouver’s West restaurant, where this blind taste test was conducted last February. Below the Nut Farm’s proprietors (who wish to keep their name and farm’s exact location private) were sold out of truffles this week, but hope to harvest enough to supply a gala dinner for the second-annual B.C. Truffle Festival (which also celebrates local wild truffles), being held at the restaurant on Monday night. 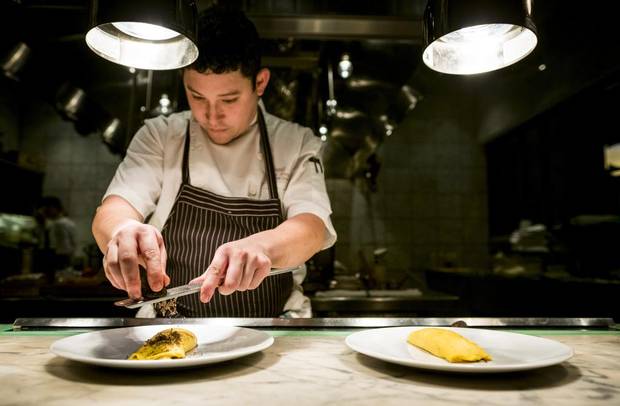 Chef Quang Dang from West Restaurant in Vancouver prepares B.C. perigords next to the French truffles for a blind tasting.

But how do the two compare in aroma? (Truffles don’t actually have much flavour.)

Mr. Dang spirits the truffles away to his kitchen, where he shaves them both over cold scallop tartar, presenting them on identical plates with the place of origin scribbled on pieces of paper underneath.

Plate B is sweeter, yet flatter, with a hint of plaster. The celery overpowers the scent. “This is more perfumed,” Mr. Knowlton offers. “It has a more pronounced truffle essence, but I think it’s local because the aroma is more delicate.”

Everyone around the table agrees that B is probably the B.C.-grown truffle. ” It’s a bit more subtle and soft,” server Carmen Morton says. “I think A is French because it’s more pungent, it stands out.”

Surprise! The more pungent truffle on Plate A is from British Columbia. We were all wrong. In a second blind taste test, with the truffles shaved over a simple omelette, the B.C. truffle’s floral aroma fades slightly under the heat and is harder to detect, but is still preferred by all.

“The B.C. truffles have more fragrance because they’re fresher,” Mr. Dang explains. “This is only a couple of days out of the ground. The French truffle has been shipped all over the world. Who knows how old it is? In terms of having a beautiful new ingredient at our disposal – from this terroir, grown in our part of the world – I think it’s fantastic.”

John Horne, executive chef of Toronto’s Canoe Restaurant, which specializes in Canadian cuisine, says this year’s crop is even better. “They’re bigger and firmer. The flesh is really dark, with nice white veins. It’s a very beautiful truffle, that’s for sure. I’m a big supporter.”

Mr. Horne has conducted similar blind taste tests in his restaurant, last month and in December, 2015. “Both times, only a handful of people guessed correctly,” he says. “Most had no clue, and these were some very educated diners.” 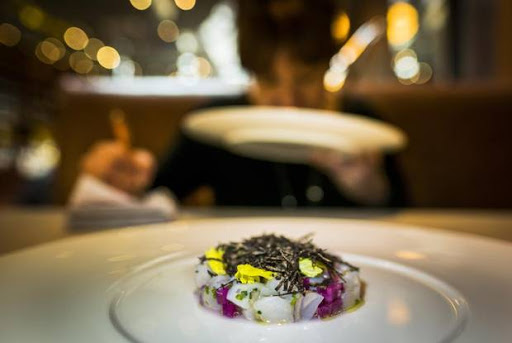 Over on Vancouver Island at Below the Nut Farm, south of Nanaimo, farmer “Chris” is pleased as punch that the fungal fruit of his 10-year-old, five-acre truffière is being so well received.

He and his wife, Sheri, had never even tasted a black truffle when they bought the farm in 2003. “We were looking for a retirement project,” Chris says by phone, declining to disclose his surname, partly because they’re “very private people,” but also to guard against poachers. (Theft is a big problem in all truffle-growing regions.)

“We had thought about emu farming or growing garlic. Then we read a newspaper article about truffles being grown in this region. We seemed to have the right climate here on the island. And it sounded like something that required a small, upfront investment with a potential payoff that was quite large.” He says they’ve invested about $30,000 cultivating the farm over the past 10 years; about half of it spent on 60 tons of limestone to alkalize the soil.

In 2007, they planted 110 trees (half hazelnut, half oak) in two separate orchards, one for Périgords, and one for French Burgundy truffles. The inoculated seedlings were purchased from a Kelowna subsidiary of Charles Lefevre’s New World Truffieres in Eugene, Ore. Now, an internationally renowned mycologist and co-founder of the Oregon Truffle Festival, Dr. Lefevre had developed his own method for inoculating oak and hazelnut tree seedlings with truffles spores in 2000, while still a graduate student at Oregon State University.

Six years later, in 2013, they found their first Burgundy truffle – the first Burgundy grown in all of North America, for that matter. “We were about to give up. We had been spending 15 to 20 hours a week tilling and pruning and working on the soil. And then all of a sudden, I just stumbled over a Burgundy that a squirrel had dug up.”

A few months later, they found their first Périgord. (They found 10 that year, but nine were rotten.) This was the same year that Bill Stewart found the first B.C.-grown Périgord on his truffle farm in Abbotsford, which has since been decimated by Eastern Filbert Blight.

Both truffle specimens were sent to the University of British Columbia for DNA testing. Shannon Berch, a research scientist with the B.C. Ministry of Environment and founder of the B.C. Truffle Association, came to visit the farm and assist in the process.

“Chris is incredibly methodical,” she says. “There is more failure than success in this industry. He is basically doing all the fundamental stuff right – watering, mowing, pruning, liming. You need to keep on top of it week after week, month after month, year after year, before you can even hope to get your first truffles.”

Although the farm has been producing Périgords consistently since 2013, the quantities weren’t large enough to market. This year, the crop exploded and they’ve begun selling direct to chefs across the country. The price, at $2 to $3 a gram, is on par with French Périgords.

They’ve also begun harvesting with two Vietnamese pot-bellied pigs, Annabelle and Stevie, which they have trained with treats to root out the scent of ripened truffles without devouring them.

“This is amazing,” says Brooke Fochuk, one of the most successful truffle-dog trainers in the Pacific Northwest. She and her truffle-hunting puggle, Dexter, have helped Chris and Sheri harvest their farm in previous years. “No one is using pigs any more. They’ve been brushed off as a ridiculous notion. People seem to think they’re too big and unruly. The fact that he is doing it defies all odds.”

Chris says he would like to invite visitors and media to the farm, but he simply doesn’t have the time. “I spent the entire month of January, all my vacation time, harvesting. Maybe 10 or 20 years down the road, when the orchard begins its decline, we’ll start doing some ecotourism.

“We’re not looking for fame or anything like that. We’re just part-time farmers trying to produce a local product that Canadian chefs can put on their menus and be proud of.” 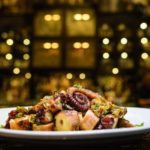 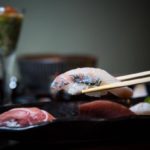 Top new Vancouver restaurants for 2018 next