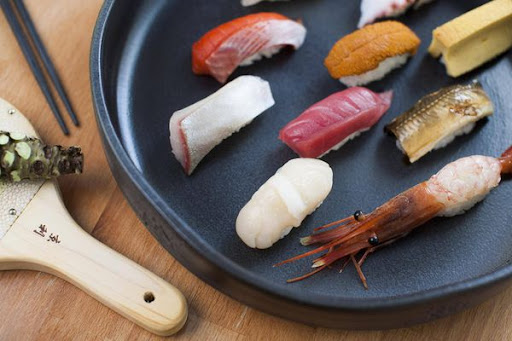 Chef Masayoshi Baba serves masterful sushi at his restaurant, which opened last August, but he and general manager Tomohisa Uchida need to define their vision.
RAFAL GERSZAK FOR THE GLOBE AND MAIL

Masayoshi, a small 24-seat Mountain View dining room, has garnered the patronage of many local chefs and industry folk since opening in August. They don’t come for the modest black-and-white decor, or the leisurely – sometimes haphazard – service. They come for Mr. Baba’s exquisitely detailed – often sublime – cooking (he was a sushi chef at Tojo’s for more than a decade), and the enthusiasm of his partner, general manager Tomohisa Uchida (also a Tojo’s alumnus).

“Do you still go to Tojo’s?” Mr. Damilano’s dining companion asked. “I haven’t been since these guys left.”

Masayoshi has not usurped the throne yet. Before Mr. Baba is anointed Vancouver’s new king of sushi, he and Mr. Uchida are going to have to define their vision and resolve some serious service issues.

That night, while we all sat around the bar basking in the glow of the chef’s undivided attention and the jewels in his high-end omakase menu, two families with children (who had likely ambled in from the neighbourhood for the more casual à la carte offerings), stewed in frustration at nearby tables.

“I guess you’ll have to try octopus another time,” one father said to his young son, after cancelling a long-awaited order and requesting the bill. “It was a lovely meal,” he added, “but I now I need a ham sandwich.”

Is Masayoshi a fine-dining destination or a casual neighbourhood joint? It cannot be both. I suggest they focus on the former, given the chef’s considerable talent and creativity.

Next, a special New Year’s platter laden with delectable morsels symbolizing good fortune: black beans (seeds of fertility) dusted with gold leaf and skewered onto bamboo toothpicks (representing pine needles); pink-edged kamaboko (cured whitefish) steamed into loaves, sliced into rope and tied in a knot; a bowl of creamy uni paired with crunchy herring roe; a small grilled eggplant spiralled like a spinning top and served with a dab of dark, deeply funky aburi miso that tasted like coffee mixed with aged Parmesan; lightly smoked salmon pressed between thin rounds of lotus root splashed with a plum vinaigrette so sour it smacked the palate to delightful attention.

This is a chef who pushes the extreme edges of pure flavour. A green salad is dressed with astringent vinaigrette, earthy burdock and firmly chewy geoduck.

Dashi is seeped to order in a reverse-gravity siphon maker (boiled right in front of the customer), distilling an exceptionally clear, forest-floor-fragrant broth from a handful of dried bonito flakes, shiitake, sake, anchovy and kelp. Chawanmushi, savoury steamed egg custard studded with rare tuna and tender pine mushrooms, is barely set so it still trembles like gelatin.

There were some misses, as well. A clumsy cabbage roll filled with overcooked turnip, dry snapper and a flabby slab of bacon was difficult to eat. A very expensive lobster tail had a pulpy texture and bland flavour, easily overpowered by cilantro and sesame-oil-slicked cabbage.

Raw fish is not the chef’s strongest point. He hesitates with the knife, resulting in edges that are not razor-sharp clean. But his al dente, lightly seasoned rice is exemplary. He grates fresh wasabi to order on a shark-skin rasp. And his nigiri seasonings show real innovation and attention to detail. Bitter orange-peel zest dusted over translucent ivory scallops, for example, and buttery flounder covered in a transparent sheet of clear kelp.

We are in awe. But then another set of customers walk in and the spell is broken. The chef scrambles to keep up and wipes the sweat from his brow. The general manager looks nervous. Our food is slower to arrive. Dessert takes forever.

“I feel like I’m in Big Night,” says my friend, referring to the classic food film about a failing Italian restaurant run by two brothers gambling on a special dinner to keep their dream alive.

My friend has been a Masayoshi fan since it opened. He tells me I have to “surrender” to the slow pace and appreciate the wonders that unravel.

I agree that this experience has a wonderful intimacy. The owners are pouring their heart and soul into this special little restaurant. But it could be so much better. And not all customers are as patient as my friend.

The owners have already made some adjustments to make it a more elevated experience. They have taken time-consuming sushi rolls off the menu. They have replaced paper napkins with linen and are slowly expanding a premium sake and wine list.

They still need a sous chef, for whom they are currently searching. And they might want to consider dropping the regular menu and offering only omakase with two set seatings a night.

Masayoshi has the potential to be one of the best sushi restaurants in Vancouver. But before that happens, the owners will have to embrace the management of the kitchen and the floor with the same passion they are pouring into the food.

0Like
AnnaLena Restaurant: Casual dining with thoughtful but fussy dishes previous At Kissa Tanto, Italy and Japan coalesce with Vancouver next