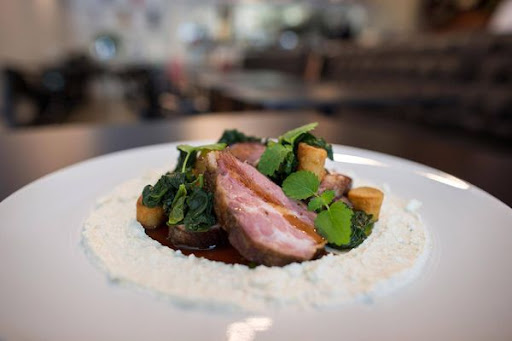 AnnaLena is a conundrum. Not for you, because I’m sure you’ll enjoy this new Kitsilano kitchen tremendously. But for critics like me, caught in the outdated straitjackets of star ratings and ranking systems, it is difficult to categorize.

The setting is definitely casual. It is a cleanly elegant black-and-white room with polished concrete floors, tufted leather benches, modern Lego sculptures to break up the minimalism and a full-frontal glass garage door that strips away all barriers between the dining room and the sidewalk on warm nights.

The service dresses down. And I don’t mean just the bloomer shorts on one server that were cut so high they would make the Cactus Club hiring team blush. I’m referring to the amateur tendency of constantly checking in to ask, “How does that first bite taste?” If it is truly unappetizing, we will say so. Just like we did when the gin and Aperol cocktail tasted like Orange Crush, which was promptly fixed with more lemon and sparkling wine.

The wine list, on the other hand, shows maturity. It is impressive to see the obscure yet deliciously refreshing Sea Star wines from Pender Island in this tightly edited selection. That is a confident choice.

I also feel ambivalent toward the kitchen. Mike Robbins is a serious chef with great potential. He is going to be a star, mark my words. He was already terrific at Oakwood Canadian Bistro, where he elevated classic comfort food with ingenuity and finesse. Now, in his own restaurant (general manager Jeff Parr is his partner), he is much more ambitious.

The tuna in a papaya salad is cured overnight to draw out the moisture and give it a firm, sashimi-grade texture. Veal sweetbreads, a daily special, are slowly brined in milk (yet not pressed), making them as succulent as fatty chicken thighs.

Lobster bisque may not be a typical bisque, thickened with shells, but all the elements – the fresh ruddiness of lobster claws gently locked in with a garlic confit, a broth delicate in weight yet enriched with table cream, the brightness of crisp celery in the seared mirepoix – add up to something better. It captures the thoroughly satisfying essence of a buttery lobster feast without the traditional stodginess.

His technique is really off the hook. Take the mussels, for instance. So much is going on in this outstanding dish. First, the choice of small East Coast mussels packed with brininess is commendable. These little gems taste so much more like the ocean than the flabby, cultivated monsters we get here. He locks down their intense flavour by dry searing the mussels in their shells on really high heat before cracking them open with a sizzling ladle of stock.

The mussels’ white-wine fennel broth is married with crisply sautéed fennel flesh and a frothy foam deep flavoured with fennel fronds and bonito flakes. At the bottom of the bowl, you will find whole cloves of garlic. Or is that potato? It’s hard to tell because the garlic has been blanched 10 times – 10! – to extract its sharp bitterness and infuse it with pillowy softness. On the side is torn brioche that has been charred and tossed with garlic oil for mopping up every last speck of brilliant green thyme oil.

Casual restaurants simply do not integrate so many labour-intensive steps into every mouthful. But sometimes, Mr. Robbins does not know when to stop.

Bison tartare is overdone with a Worcestershire and Tabasco cure. The meat has no moisture; it tastes almost gelled. Fresh kusshi oysters are lost under a blanket of shaved foie gras, compressed apple and jalapeno mignonette.

Beautifully tender lamb neck suffocates the palate with sweet house-made ricotta, floury Parisienne gnocchi and rich lamb jus. Does the spinach really need to be brined with olives when the dehydrated olive powder is already overpowered by all the other flavours?

Several plates cry out for freshness. The ingredients do not all need to be manipulated with soils, powders, brines and foams. Who is Mr. Robbins trying to impress – his customers or other chefs?

I asked. His answer surprised. He said he was doing it for his cooks. “Do you know how hard it is to get good kitchen help these days?” he asked. “If they’re not learning something new every day, they’re gone.”

That is an admirable attitude. But when you are running a restaurant, the customers have to come first.

If AnnaLena were a fine-dining restaurant, I would give it two stars, because the dishes could be better composed with more freshness and less fussiness. But as a casual restaurant, it gets three stars as it certainly hits higher than most.

0Like
Burdock and Co. shines brightest previous Masayoshi: Sublime omakase that’s worth the wait next