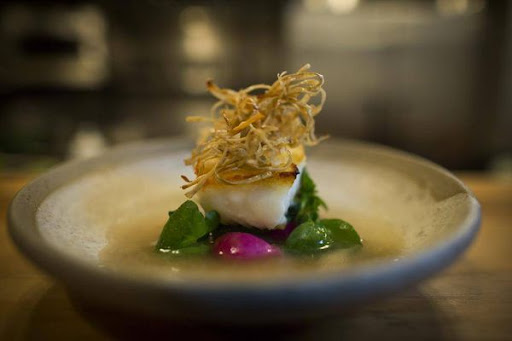 Lightly seared halibut in a rich burdock-tea broth should be available all summer.
JOHN LEHMANN/THE GLOBE AND MAIL

If there were a competition for the restaurant that best represented Vancouver, Burdock & Co. would be the hands-down winner.

From the ruby-red sweetness of perfectly ripe, organic strawberries to the impressive depth of its boldly curated all-natural wine list, this refined-yet-rustic Main Street charmer is a shining reflection of progressive local tastes.

I’ve been following executive chef and co-owner Andrea Carlson since she was a pastry chef (and later sous chef) at C Restaurant in the early 2000s. I’ll never forget the time my friend hired her to cook a private dinner in his home. For a paltry $10 a head (which was all he could afford), she spun edible magic from humble beets, sustainably farmed trout and wild herbs.

A passionate gardener, Ms. Carlson has studied landscape design and organic farming. She built a kitchen garden for the on-site restaurant at the Tofino Botanical Garden and spent eight months working at Sooke Harbour House, learning how to cook with all sorts of obscure wildflowers grown in its extensive garden.

Her earthiness, uncommonly combined with exquisite technique, bursts off the top item on her new menu: an asparagus salad (shaved to transform the fibrous texture of a raw stalk into long silky strips) dressed with sweet cicely pod vinaigrette (a seasonal herb from the parsley family that tastes like licorice). It’s so green, fresh and luxuriantly creamy.

After Sooke, Ms. Carlson moved back to Vancouver to become chef de cuisine at Raincity Grill, where she created the first Canadian restaurant menu based on the 100-Mile Diet. To do so, she forged relationships with previously unknown farmers that local chefs now take for granted. I don’t think it’s an exaggeration to say that there would be no Agassiz-Harrison Mills Circle Farm Tour today if it weren’t for her early patronage.

At Burdock & Co., small local artisans and growers are showcased in a simple yet sinful bread dish. The whole-wheat loaf (from Vancouver’s Terra Breads) is sliced into thick wedges and topped with soft ash-dusted La Pyramide Cheese (from Agassiz’s Farm House Natural Cheeses), drizzled with Hives 4 Humanity honey (from the Downtown Eastside).

For the past six years, Ms. Carlson was executive chef at Bishop’s. On the surface, it seemed like a perfect fit. Proprietor John Bishop is the granddaddy of Vancouver’s locavore movement. Ms. Carlson is its next-generation leader. But let’s face it: Bishop’s is a bit stiff and rarely frequented by the new generation – or anyone younger than 50 earning less than six digits. Ms. Carlson has been flying under the radar.

Her new restaurant is a world apart, located in the bohemian East End nexus of Main Street and 11th Avenue. It is by no means a hipster hangout. There were a lot of suits and ties in the crowd the nights I was there (which could indicate that Ms. Carlson’s West Side clientele has followed her here, or perhaps be a reflection of the neighbourhood’s growing cachet).

The long, narrow space (previously inhabited by Cafeteria) was renovated and designed by Kevin Bismanis, an architect who left a successful day job to open the restaurant with his life partner, Ms. Carlson. (Full disclosure: I once went fishing with Mr. Bismanis and was mesmerized to see him kiss every salmon he caught before invariably releasing them all.)

Mr. Bismanis knocked down the walls to reveal an open kitchen, surrounded by barstool seating. He tore off a faux red-brick wall to expose natural brick underneath, which has now been whitewashed. He salvaged barn boards to cover the opposite wall, highlighted nooks with blue-sky paint and built high-top communal tables (which really do encourage much-needed conversation among friendly phobic Vancouverites).

The tables are set with antique silver cutlery and natural linen napkins. The menus are embossed on high-quality paper and taped on sage-green mounting with the sweetest-ever squirrel-motif stickies.

Burdock & Co. doesn’t take reservations, which may be problematic to some. But this is the way the world’s moving, so arrive before 6 p.m. on a Friday night if you don’t want to wait and get used to it. (Or go during the week, when the restaurant’s not so busy.)

Released from Bishop’s fine-dining constraints, Ms. Carlson has created a more casual menu that includes rarefied fried chicken (with house-made pickles and charred-chili vinegar), sumptuous pork-belly ramen with candied bacon (the same that she makes at Harvest Community Foods in Chinatown) and elevated grains (do try the fire-roasted green farro with spruce tips and black-garlic purée).

Wheat berry risotto is a chewy granola-crunchy dish that everyone, except me, seems to love. Though I adored the smoked crema, I thought it needed more castelvetrano olives to give it a brighter punch.

The seafood is all seasonal and sustainable. Sadly, you won’t be able to try the B.C. spot prawn boil, elegant in its simplicity yet sexed up with house-made kimchi deep-fried heads. The season ended last week. But lightly seared halibut – served with a rich burdock-tea broth, fried burdock shoestrings and spring radishes braised with hop shoots – should be available all summer.

One of the restaurant’s most compelling elements is the wine list. It’s a “naturalist” selection comprised of wines made with biodynamic principles as applied to the cellar (no added sulphites, preservatives, etc., etc.). There are only two B.C. wines on it. This is a bold statement from a locavore chef. Vancouver was way ahead of the organic/local/sustainable curve once upon a time. But the B.C. wine industry hasn’t kept up with the trends.

Perhaps I’m wrong about Burdock and Co. being the quintessential Vancouver restaurant. It’s not so much a reflection of what we are right now, but more a beacon of where we should be headed. 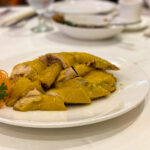 From the Archives: The Couture of Cantonese Cuisine previous AnnaLena Restaurant: Casual dining with thoughtful but fussy dishes next